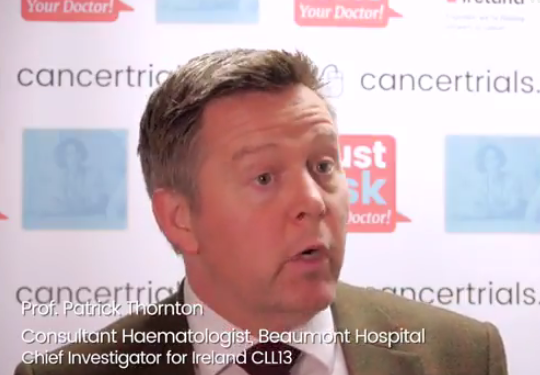 Cancer Trials Ireland has announced the opening of the Irish arm of an international cancer trial that is investigating promising cures for leukaemia.

It is expected that up to 60 patients from Ireland with a type of leukaemia known as CLL (Chronic Lymphocytic Leukaemia) will participate in the trial.

The trial aims to test treatments for leukaemia that could be more effective and have fewer side effects than standard chemotherapy treatments.

CLL is the most common type of leukaemia in the western world with most cases developing in people over 55. About 200 people in Ireland are diagnosed each year with CLL which affects the blood, lymph glands and bone marrow.

The international trial is being led internationally by the German CLL Study Group (GCLLSG). This group is the world’s leading authority on Chronic Lymphocytic Leukaemia research.

Professor Patrick Thornton, Consultant Haematologist at Beaumont Hospital, who has collaborated with the German Study Group on previous trials, is the Chief Investigator for the trial in Ireland. The trial is being coordinated by Cancer Trials Ireland.

“Chemoimmunotherapy is the standard initial (first-line) treatment for patients with CLL and with it many patients can achieve good remissions. Unfortunately it can be too toxic for some patients because they can be less fit and unable to tolerate intensive regimens. So there is a pressing need for alternative chemotherapy-free treatments,” Professor Thornton said.

“In this trial we are testing a number oral non-chemo treatments and new antibodies which have proven to be effective and safe as second line treatments (treatments given when initial treatments don’t work) with little side effects.

“We’ll determine which treatment is more effective and has fewer side effects than the standard chemoimmunotherapy”, he said.

“This is a very significant trial because of the positive results the treatments we’ll be comparing have already achieved and its size, in terms of the number of countries, research units and patients participating. I’m confident it will deliver a new standard of care”, Professor Thornton said.

Almost 1000 patients from 160 research units across 10 countries will participate in the trial. Participating countries include Ireland, Austria, Belgium, Denmark, Germany, Finland, Israel, Netherlands, Sweden and Switzerland. Patients will be on the trial for up to 5 years.

“To be invited to open a trial of this significance in Ireland is a great vote of confidence in Ireland’s cancer trials research community and our ability to contribute to the global effort to find answers to cancer”, Professor Thornton said.

“Not only does it help us contribute our expertise to finding better treatments, it enables our patients to access promising treatments at no cost which they would otherwise not be able to access for many years.”

There is also a translational dimension to the trial as it will also look at the modern molecular markers for example NOTCH1 which effect treatment response and remission duration and survival.

Participants will be randomly allocated to one of the following four treatment arms.

Rituximab: this drug is directed against a molecule called CD20 (expressed on the surface of CLL cells) and kills the CLL cells in combination with the patient’s own immune system.

Obinutuzumab: this drug is (as Rituximab) an antibody which binds to a specific molecule on the surface of CLL cells and then destroys them.

Ibrutinib: this drug inhibits a certain protein (Bruton tyrosine kinase) of the cell metabolism in CLL cells. This protein is needed for growth and survival of cells, therefore the intake of Ibrutinib leads to their death.

To find out more about this trial and other cancer trials visit cancertrials.ie and talk to your doctor and/or the cancer trials research team in your hospital.