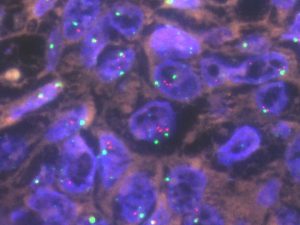 The uncovering of genes that are likely to lead to the growth of breast cancer cells by the Wellcome Trust Sanger Institute could lead to new cancer trials in Ireland to test new treatments.

Commenting on the study, the result of which were published in Nature, Professor Bryan Hennessy, Clinical Lead at Cancer Trials Ireland, said that while Cancer Trials Ireland has already conducted or will conduct trials with drugs such as palbociclib and copanlisib which target cancer genes such as CDK and PI3K he expects a lot more in the future.

“Our understanding of the role of abnormal genes in generating breast cancer cells has been growing. The significance of the Wellcome Trust Sanger Institute study is its size, the huge volume of data it generated and the identification of new genes associated with the disease,” he said.

“Our molecular level research shows us that breast cancer cells may look the same under the microscope. But when we look at their genetic building blocks we can see important differences between them”, he said.

“Having identified at a molecular level what can cause the differences in cancer cells, the next steps are to develop and test treatments that intervene and stop the genes generating the individualised cancer cells.”

“There is great potential, and it is an area attracting much interest, to develop treatments that are more targeted to individual patients based on the abnormal genes that are driving their cancers.”

“This will involve cancer trials similar to those that Cancer Trials Ireland has been conducting. Our network of cancer trials centres in hospitals across the country, highly experienced researchers and history of international collaborations means we are well placed to ensure patients in Ireland get early access to these treatments as they emerge for testing over the next decade,” Professor Bryan Hennessy said.