Cancer Trials Ireland today said that the €3 million cut in its grant is now having a direct impact on potentially breakthrough treatments being available for people in Ireland with cancer.

Due to a 20% cut in the grant it receives from the Department of Health, every year since 2016, Cancer Trials Ireland has been unable to open trials in disease areas such as lymphoma, testicular and endometrial cancer which means people with these kinds of cancers cannot access the newest promising treatments. 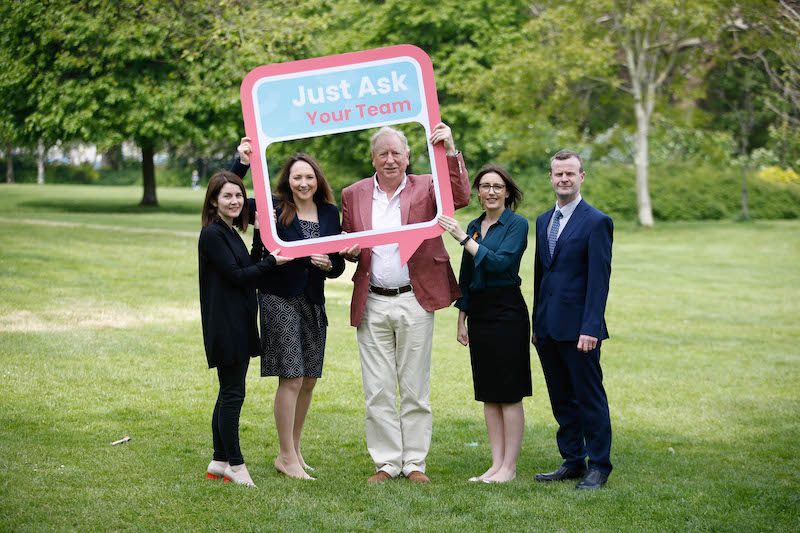 At the launch of Cancer Trials Ireland’s Just Ask Your Team campaign today (Thursday 16th May 2019), ahead of International Clinical Trials Day 2019 (Monday 20th May), which is dedicated to the many teams behind the 80+ cancer trials that are open in 16 hospitals around the country, Professor Bryan Hennessy, Clinical Lead at Cancer Trials Ireland said: “At a policy level it makes no sense to starve an area of research that can offer people with cancer a lifeline, when cancer rates are doubling and 1 in 2 people in Ireland will develop cancer during their lifetime .”

“As a result of these continuing cuts, the number of people joining cancer drug trials each year is falling drastically. In 2014, before the 2016 cuts were introduced, 3% of people in Ireland with cancer were on a cancer drug trial. Last year it was down to 1.5%.

“This means that every year less people with cancer can access potentially effective treatment options when the standard treatments are not working. Cancer trials not only have a profound impact on the lives of people with cancer today, but they deliver in the medium and immediate term.

“As an oncologist seeing patients every day, some of whom have no options left, continuation of these cutbacks is unjustifiable by any standards,” he said.

Eibhlín Mulroe, CEO of Cancer Trials Ireland, said: “Trials can often be the best treatment option available for cancer patients and offer a higher level of oversight because of the team nature of clinical trials. Up to 20 people can be reviewing data associated with a patient’s response to treatment and there is great comfort in that knowledge for patients on our trials.

“Trials are also a very cost-effective way to provide cancer treatments as trial drugs are provided by pharmaceutical companies. For every €1 in Government grant we get, we can attract €3 in investment in trials4. So, at a health policy and economic basis it’s a no-brainer,” she said.

Averil Power, Chief Executive of the Irish Cancer Society, said: “The Irish Cancer Society is proud to continue our support for Cancer Trials Ireland as part of our investment in life-saving cancer research. Clinical trials save and improve lives by giving patients access to new drugs they simply wouldn’t get otherwise. The Government recognised this when they committed to doubling the number of patients on trials by 2020. Instead, cuts in Government funding have resulted in fewer patients accessing trials. This must be addressed as a priority.”

New research from the University Hospital Limerick found that the number of its patients asking to participate in a cancer trial increased by 7% last year2. It also found that a huge majority of patients (93%) believe it’s important to have cancer trials available as a possible treatment option – an increase from 88% during the year. This shows us that there is a real want and need there for people with cancer to join cancer trials and they deserve to be given this access.

Also, as part of the launch of the Just Ask Your Team campaign, Cancer Trials Ireland conducted new research with 16 cancer trial research units in hospitals across the country, as well its own research specialists in central office, which illustrates the wealth of trials experience that exists and the team effort that is behind each trial3. This research revealed that over a third (36%) of those working on cancer trials have been doing so for 10 years or more – some over 25 years3. In addition to their experience within cancer trials, over a quarter (27%) also spend a minimum of 10 years gaining the necessary qualifications, training and experience to get there. Regarding the size of cancer trial teams in Ireland, almost 9 in 10 (89%) people who work on cancer trials work directly with 10 or more people on a day-to-day basis, over half (56%) of which work directly with more than 15 people daily.

The research also found that a huge majority (80%) cite helping patients as the most enjoyable part of their job . The second most commonly cited factor (29%) was helping to improve healthcare and advance the future of science; contributing to innovative research, developing new treatments and advancing scientific knowledge.

Cancer Trials Ireland’s Just Ask Your Team campaign aims to raise awareness of the many dedicated team of people that contribute to cancer trials in Ireland, and to encourage those with cancer, their family and friends to ask their local team about a trial that might be suitable for them. Cancer trial teams include people with cancer, their families and friends, cancer doctors and surgeons, research nurses, data managers, pharmacists, public-funders, donors, pharmaceutical companies, and Cancer Trials Ireland’s research specialists – all of whom have a uniquely important role in the cancer trial team.

Cancer Trials Ireland is a registered charity, partly funded by grants from the Health Research Board (HRB), the Irish Cancer Society and St. Luke’s Institute of Cancer Research.

The Just Ask Your Team campaign is part-funded by unrestricted grants from the pharmaceutical companies AbbVie, Bayer, MSD, Novartis and Pfizer.

For further information on cancer trials in Ireland visit cancertrials.ie or follow the conversation on Twitter @cancertrials_ie.